Top of Form
Forever In Their Debt 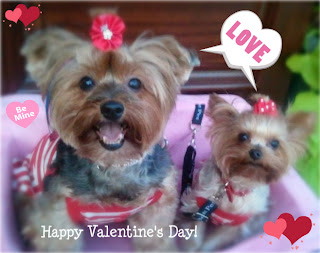 By SAUL QERSDYN
Published: February 14, 2012
Officially, it all started two years ago. Roselle Park resident Priscilla Ines Caracitas started blogging about Bebe (pronounced ‘bee-bee’) & Jolie – her standard Yorkshire Terrier and teacup Yorkie respectively – after her friends told her to share her photos and stories regarding her love of her dogs with the World Wide Web. Now, she has a Facebook page, a YouTube channel, a Twitter account, her own web site where she offers advice & product reviews, and even TLC (The Learning Channel) has called her for a show taping which will feature Bebe & Jolie’s room. Officially, it started two years ago; but her love for her dogs started way before then.
Priscilla was 17-years-old when she suffered the aftermath of her parents’ divorce. As an only child, she always wanted a sibling – a constant  – to share experiences with, but that was not to be the case. Instead, her mother and father bought her a Yorkie which she named ‘Bebe’ – the French word for baby. Whenever Priscilla would be sad and start crying as she dealt with the separation of her parents, Bebe would jump up on her bed, lick Priscilla’s tears, and then burp. It immediately made the teenager laugh and feel better. Since that moment, she was forever in debt to Bebe.
“I’m obsessed with them. A lot of people don’t understand,” Priscilla stated, now 10 years older, when speaking about her love for her dogs, “But they have this healing power, just by being with you, they make miracles happen.”
To be sure, Priscilla spoils Bebe & Jolie. She has bought them everything from formal AKC (American Kennel Club) training, pet insurance, over 100 clothing pieces (including cashmere sweaters and customized gowns), special dog food that does not contain products they are allergic to, tailored clothes hangers for dogs, and even has made them their own room.
“I don’t mind doing any of it,” says Priscilla, “They give me a feeling of joy that I could never buy and it’s the least I could do for what they do for me.”
When it was just her and Bebe, Priscilla learned a lot about being a mother when Bebe got pregnant and gave birth to two puppies. The male, named Brownie, was born with no problems but the female, Pinky, got caught in Bebe’s amniotic sac. Priscilla, with her vet on the phone, did what she could when Bebe started trying to complete the birth but began biting Pinky, and she pulled her away so Bebe would not continue injuring her. As is the case sometimes, Bebe rejected Pinky and Priscilla had to take care of the puppy as her exclusive mother for the first eight weeks of her life. Pinky pulled through and Priscilla now had two dogs to share her love with. Unfortunately, when she was walking Pinky one day, a car took the puppy’s life. It devastated Priscilla and Bebe. The Yorkie sensed the loss. It was a short time after then that she brought Jolie into her life.
Priscilla recalls, “I felt bad leaving Bebe alone during the day and, plus, I missed Pinky so much.”
Now, they’re inseparable. To be sure, there are times when she has to reprimand them or get their attention, “They know when I start speaking in Portuguese, they’re in trouble.”
Priscilla has found others who love their dogs and give them that little extra attention. On her Facebook page she and other owners all share photos and experiences. She has even gotten her boyfriend into the picture. “He loves them,” she remarked, giving examples of how he carries them around the house and even takes naps with them.
And now, what started out as a way to share funny moments, as well as tips & tricks, has blossomed into an ever-growing online presence she has called PriskyPaws as a way to thank her dogs for everything they have done for her.
“Ever hear of how some people just enter your life and leave a footprint?” she writes on her web site, “Well, my two dogs have left a pawprint in my heart.”
You can visit Priscilla at any of the following sites:
http://www.priskypaws.com
http://www.facebook.com/priskypaws
http://www.twitter.com/priskypaws
http://www.youtube.com/priskypaws
COPYRIGHT © Roselle Park News
_____________________________________________________________________________________________

SPOILED DOGS OF THE WEEK: BEBE AND JOLIE
by John Kristoff | December 8, 2011 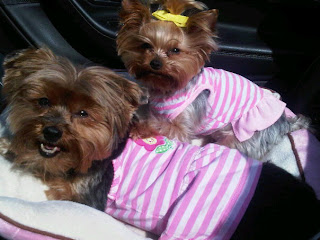 Last week we had our first installment of our Spoiled Dogs of the Week. Please read the amazing story about Valarie and her two dogs, Sunny and Ryver! And if you and your dog (or dogs) would like to be considered for this feature, please email me at john@doggyloot.com.

In this post we’re introduced to New Jersey native Priscilla, the founder of Prisky Paws, and her two Yorkshire Terriers, Bebe and Jolie.

Tell us about your dogs!
“Bebe is a standard sized Yorkshire Terrier born on January 15, 2003. She has lived a very privileged life so far. She’s been to Portugal, France and Spain for summer vacations as well as Miami Beach in the spring and the Vermont slopes in the winter. Bebe is extremely special to me because when I got her, I had first asked my parents for a brother or sister. They were having marital problems and bought me a dog instead. A few months after having Bebe, my parents divorced and I spent many nights crying. Bebe would lick up my tears and then put her wet nose on mine and burp really loudly. She did this over and over again because I would laugh every time. It may sound silly, but I firmly believe she had a purpose in my life at that time, to wipe away my tears and for that I am forever in her debt.

“Jolie is a teacup sized Yorkshire Terrier with a lot of spunk. She was born on August 2, 2006. She was purchased as a friend for Bebe. When I started working full-time and after finishing college, I would come home to Bebe and she had dried up tears and would be lying on a pile of my clothes in the corner of my room. It broke my heart to see that she missed me so much. I was miserable knowing that she was sad while I was at work so I added a second member to the family. Jolie is full of energy and loves to wear bows and dresses. She actually runs to me when I pick out the hangers from her closet. She’s a true diva.

“Bebe and Jolie are total opposites. Bebe is calm and playful while Jolie is active and selective. Their names in French mean “baby” and “pretty” My girls are the most important things in my life, they make me smile every day. They are always ready to play, and even when I’m not in such a great mood, they are ok with just lying next to me.”

What makes your dogs great?
“My dogs are great because they give me what’s important – happiness. I try every day to be the person my dog thinks that I am and that person is pretty darn wonderful judging by how they greet me every day when I come home. My friends call me crazy because of the money I spend on them, but I just can’t help it, it makes me happy!

“I remember wanting to throw my dog a doggy birthday party and searched all over YouTube and Google and to my surprise couldn’t find anything over the top! ‘People aren’t as crazy about their pets as I am?’ I thought. Well, I got to work and was adamant about being the first to actually have a full-blown doggy birthday party and make a video about it.

“My friends were my audience for the hundreds of videos and pictures. I was often compared to a new mommy because my face would light up when I saw my dogs, and I often referred to them as my girls. I noticed that every time I whipped out my phone it would make people smile. My dogs make people smile. How pawsitively pawsome is that?

“There are people who enter your life and leave footprints on your heart. I want to share my dogs with the world because they’ve left their paw prints all over my heart!”

When did you join doggyloot?
“I joined in early April 2011 and have purchased quite a bit! The team sent my dogs pretty bows for their Summer Safari Pawty in August as well as a shirt for me. We also received a bandana but the girls are so small that we repurposed it as a blanket!” 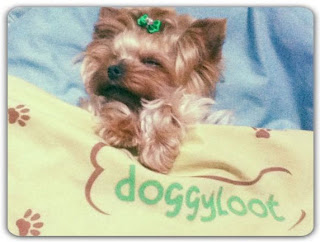 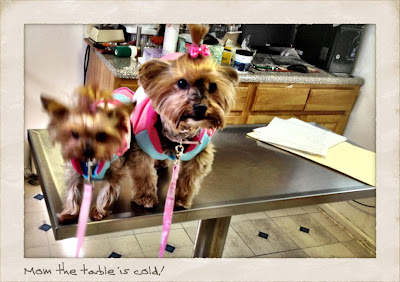 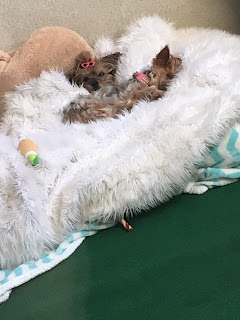 How much sleep does your dog need?